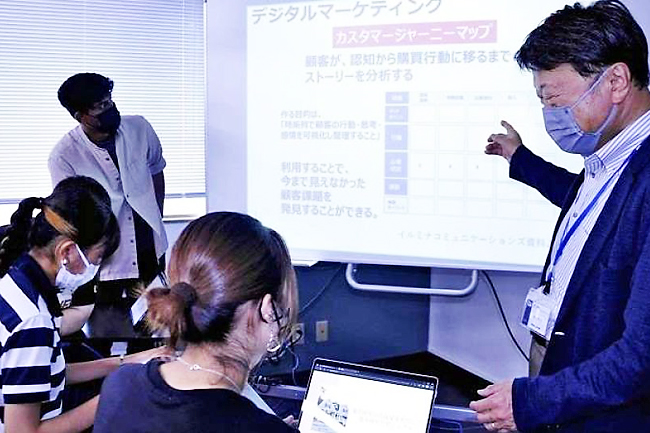 ANN/THE YOMIURI SHIMBUN – Companies are increasingly integrating digital transformation (DX) into their business models. But to take full advantage of associated technologies and make business operations more efficient and innovative, it is imperative that Japan quickly builds and nurtures a “digital workforce” well-versed in data analytics and artificial intelligence.

As part of this push, the central government is working to improve and support technical colleges and vocational schools.

The technical college tentatively titled Kamiyama Marugoto will open next spring in Kamiyama City, Tokushima Prefecture. The college, backed by IT entrepreneurs and others, will be the first five-year technical college to be established in Japan in the past 20 years. Each school year will have 40 students who will be educated for free, funded – it is hoped – by donations and funds from IT companies and individuals.

During the country’s period of rapid economic growth in the 1960s, many technical colleges were established for the purpose of training technicians and engineers. In Japan, technical colleges are considered higher education institutions equivalent to colleges and universities.

The country currently has 51 state-run technical colleges, three municipally-run colleges, and three privately-run colleges, with a combined total of about 53,000 students. Students enter these schools after graduating from high school and receive a five-year education, with an emphasis on research and practical training centered on engineering coursework.

In the computer industry, graduates of technical colleges are highly sought after as “ready to work” personnel.

Curricula of technical colleges are not bound by the curriculum of the Ministry of Education, which means that technical experts without a teaching license can teach courses. In this context, the new college in Kamiyama can offer even first-year students practical courses such as programming and include leading entrepreneurs among its lecturers.

“During their seven years in high schools and colleges, students are encouraged to study for entrance exams and carry out job search activities,” said Takaki Matsuzaka, who is expected to become secretary general of the new college. “But in technical colleges, we can develop human resources that can be internationally competitive (immediately).”

Based on its existing educational framework, Japan is currently unable to meet the current severe shortage of digital labor.

In 2017, Shiga University established its Faculty of Data Science to foster the digital workforce; many other universities soon followed suit. The digitization of society and the adoption of DX within enterprises has accelerated amid the novel coronavirus pandemic, but there is a shortage of personnel skilled enough to keep up with this rapidly changing pace.

According to the Ministry of Economy, Trade and Industry, around 1.13 million people are expected to work in the IT industry by 2030, representing a projected staff shortage of around 790,000.

In the International Institute for Management Development’s Global Digital Competitiveness Rankings for 2021, Japan ranks 28th among the 64 countries and territories surveyed, behind South Korea (12th) and China (15th).

“Investment in the workforce” is a key pillar of the Basic Policy for Economic and Fiscal Management and Reform, adopted by the Council of Ministers in June. The government hopes that technical colleges and vocational schools will serve as a fundamental nucleus to develop a digital workforce, in tandem with universities.

The basic policy also indicates that the government will accelerate its response to changes in society, for example by developing an innovation-driven workforce ready to face digitalization.

The Ministry of Education, Culture, Sports, Science and Technology has allocated 62.5 billion yen to upgrade 51 public technical colleges this fiscal year. The funds will help promote the development of human resources capable of catalysing technological innovation. However, since there are only 57 technical colleges – including public and private technical colleges – it is essential to use the approximately 2,700 vocational and vocational schools in the country, which are increasingly prioritizing the digital education.

Next spring, the Japan Electronics College in Tokyo will set up its DX Specialist Department to train personnel to promote DX in the workplace. For its part, the Yomiuri College in Tokyo set up a program in 2016 called Cross Media Information System, which trains engineers.

The Department of Education also works with industries that employ graduates and provides grants to vocational and vocational schools that develop programs to teach digital skills.

“We would like to develop a workforce that is ready to work and able to deal effectively with the challenges of the industry,” said a ministry official.

Variable rate mortgages are growing in popularity. Do they suit you?