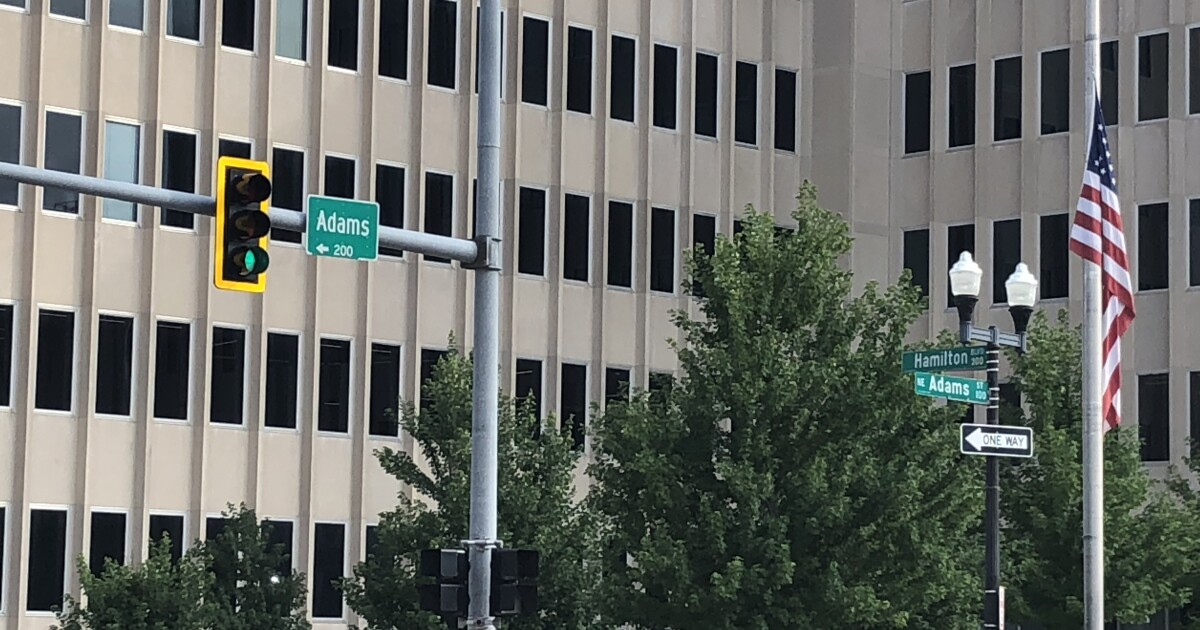 Adams Street and Jefferson Avenue have been one-way streets in downtown Peoria for more than 70 years, but the city wants to return to two-way traffic in order to revitalize the area.

It’s a project that will take about three years and cost more than $12 million, but the hope is that the business and pedestrian benefits will make that time and money worthwhile.

“That was the real start of the project, but we’re also moving to two-way traffic to keep people downtown or who want to be downtown,” Klopfenstein said. “When it’s one-way and you’re going fast, you’re just directing people downtown. We want to make downtown a destination where people can come to shop, eat, work, just hang out and be downtown.

Cindy Loos of engineering consultant Hanson Professional Services says much of the project work will take place at 13 signalized intersections along the corridor. She says overhead signals will be more visible and reduce the risk of collisions, while corner bumps with ADA-compliant ramps will shorten crosswalks.

She said another big benefit will be greater connectivity in the region.

“It really provides better access to downtown, so you don’t have to drive around the block to get somewhere; you can go straight there,” Loos said. “On Jefferson we are making the upgrades to Fayette Street so you will have direct access east (Interstate) 74.”

With the preliminary design phase continuing through the end of this year, project leaders held a public briefing earlier this month at the Gateway Building. Among those who attended was Michael Bruner, who lives in East Peoria and works downtown.

“I was watching a nice video here that kind of explained the scope of the project, what it could look like with a nice kind of graphic that shows parking, traffic lanes and a central lane with accommodations for pedestrians and cyclists . But (I’m) just here to find out more, to see what Peoria plans to do and how it might affect my journey to my job,” said Bruner, who was encouraged by the preliminary designs he saw.

“I think I’m going to like it, because it’s going to be less (of) going fast, because you (currently) have three lanes of traffic that are, ‘Oh, hurry up so I can pass this person so that I can pass and spin my right hand. That’s kind of how I feel when I come to work in the morning, where (the new setup is) there will be less lanes, more maybe relaxation, where I can just take my time and get to work and get there safely, and hopefully (it will) allow pedestrians to get around safely as well.

Also present at the meeting was Pat Sullivan, co-owner of waterfront developer JP Companies. He says that while he understands the reasoning behind the project, he has mixed feelings.

“A bit frustrated as we started doing this type of work in the warehouse district, and now we’re going down to Fayette. It has to be done, make no mistake,” Sullivan said. “But you have – the biggest subdivision that’s growing in Peoria is the Warehouse District, and when you start to drop that and go next door and grow – which is good, because you’re going to have to do that for years more late – that’s not where people are trying to settle now, in the warehouse district.

Instead, Sullivan thinks the city’s priority for road projects should be to make streets safer for traffic, especially near Dozer Park and at the intersection of the Adams and MacArthur freeways.

“We have a dangerous lane on Adams in front of the ball diamond, going up State Street. If you are coming east you have to take this dangerous lane past the ball diamond and there are accidents almost every day. In front of CT Gabbert (Remodeling and Construction) there by MacArthur, they have this end right from his building and he says there are at least two or three people who almost have an accident (daily).

“So let’s get rid of the accident-prone (sections) and finish the warehouse district, then keep doing the (downtown). We have to finish what we started and then continue; you’re not just playing hopscotch. Yes, we have to revitalize everything, but we don’t have the money. But don’t exhaust what you started.

“Wherever we can try to get funding, we try, so we can get the best possible product,” Klopfenstein said.

Project managers are working with the Illinois Department of Transportation for portions of the project, specifically the intersection of Adams and Kumpf Boulevards and the foot of the Bob Michel Bridge. Kumpf’s southbound left-turn lane toward downtown will pass from Adams to Jefferson.

Current designs provide for one lane of traffic in each direction on both streets, along with a center left-turn lane, parking lanes, and a bicycle lane. It’s an interesting addition for Bruner.

“If I lived downtown where I could ride my bike, that would be great because I’d probably feel more comfortable,” he said. “Once the bridge (US Route 150), the McCluggage Bridge, is fixed, I would have this potential opportunity to bike to work, which would be pretty nice.”

Loos said the project is planned to minimize the impact on drivers as work progresses.

“During construction, it will maintain one-way traffic; we’ll kind of do alternate intersections on one side of the street, so you can still move one block,” she said. “After construction, you will still have parking in front of your businesses as there are today, but people will be able to move around more easily.”

Along with the two-way conversion, the city is exploring the possibility of converting the Fulton Street plaza between Adams and Jefferson back into a through street.

“Fulton is part of the planning process for this project, but it will not be built as part of this project. So we’re looking at it from a connectivity or traffic network perspective, but we’re not actually going to build it,” she said.

“But the long-term aim is to reopen Fulton Street to traffic in both directions, while making it a flexible space so that we can close it for an event or a special (occasion) that we want traffic not to be not there and have pedestrian space. So it will be a kind of flexible space when it reopens. »

Klopfenstein said the curb-to-curb widths of Adams and Jefferson won’t change, only the lane configurations. She said that while most of the work will be focused on intersections, they will be resurfacing by milling and lapping the two streets.

She also noted that the city eventually wants to have traffic in other sections of the two streets in both directions, and further improvements may be pursued at a later date.

“We plan to pursue this one-way to two-way conversion, we just need to do this one and build it, and then get the funding to do the rest,” she said.

“We don’t do major sidewalk improvements; we just do the ADA ramps at the corner. We will therefore have to look in the future to obtain more funding to make real pedestrian improvements on all the sidewalks crossing these corridors.

Once the final designs have been approved, construction is expected to begin next year, with the opening of two-way traffic scheduled for 2025.

Rajarshi Gupta takes over as CEO of ONGC Videsh