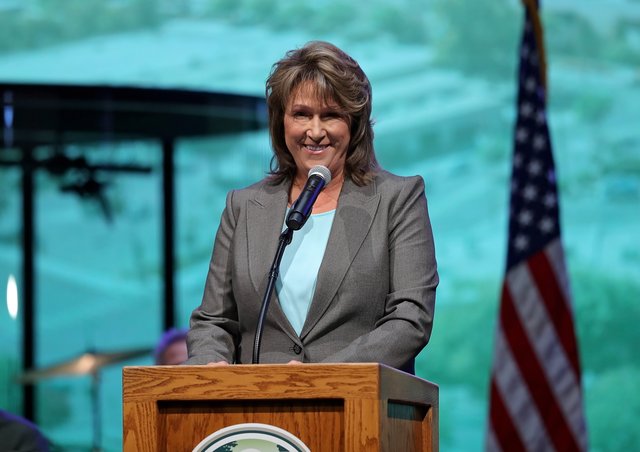 Turlock Mayor Amy Bublak thanked the city’s many employees and read about this year’s accomplishments including road projects, addressing homelessness and expanding the police department during her annual speech on the state of the city on Thursday.

The speech was delivered to a large crowd Thursday morning at Harvest Church’s downtown Turlock campus. The event was moved from the council chamber where a smaller crowd gathered due to the pandemic.

“As your mayor, I will continue to work every day to make Turlock, California the best place to live,” Bublak said. “The challenges we will face in the years to come as a community are many, but we have overcome challenges in the past, and we will do so again.”

One of Bublak’s first remarks was to greet new city manager Reagan Wilson.

“We are very pleased that our new City Manager, Regan Wilson, has completed a smart reorganization of City services for the efficient and responsive delivery of services to our residents,” she said. “As part of his reorganization plan, Mr. Wilson has appointed several new highly qualified department heads.”

She went on to explain how the city used funds to delay an increase in trash rates caused by state policy decisions.

“As many of you know, our state government instituted an unfunded mandate, changing the way all cities recycle household and business waste,” Bublak said. “This new process has resulted in an increase in monthly waste rates across the state of up to 100%. Rather than asking our Turlock residents to pay a 50% increase in monthly fees; over the next five years, your city council has voted to use the American Rescue Plan Act, ARPA funds, to delay fee increases for the next five years by using ARPA funds to cover the increased costs of monthly trash and garbage service.

She then praised Turlock residents for passing Measure A, which raised the sales tax by three-quarters of a cent.

“These funds, combined with careful budget management, have enabled the Town of Turlock to move forward with a number of priorities, including operating with a balanced budget for the third consecutive year and implementing the ‘Turlock Roads initiative to repair roads,’ Bublak said. .

The City currently has plans for 13 road improvement projects, with two more to be completed in fiscal year 2023. Once these 15 roads are completed, the City Council will develop a plan to repair all roads over the next coming years.

Bublak also commended the town council for developing a plan to tackle the homeless population in Turlock, which includes: eliminating unsafe encampments for the homeless, providing temporary shelter and social services to people in need.

“The plan is based on a wide range of approaches which will be measured and judged on their actual effectiveness in improving the lives of homeless homeless people while respecting the rights of the homeless community and Turlock residents,” it said. she declared.

She also said the Turlock Police and Fire Department is now fully staffed and has received updated equipment.

“By fully staffing our fire and police departments and providing them with new vehicles and necessary supplies, both agencies will be more successful in keeping our residents safe,” Bublak said.

“We contracted with Opportunity Stanislaus, a leading economic development organization, and the Valley Sierra Small Business Development Center to help us help Turlock businesses grow and use e-commerce and social media,” she said.

She concluded by setting some goals for the coming year, including negotiating a more favorable property tax rate, continuing with tax and road management initiatives, creating safe communities for housed and unhoused people alike. housing and the development of accessible housing for eligible seniors and low-income residents.

RBI Advocates for Demarcation of Roles to Regulate Big Tech: ‘Responsibility of Regulators Must Be Identified’