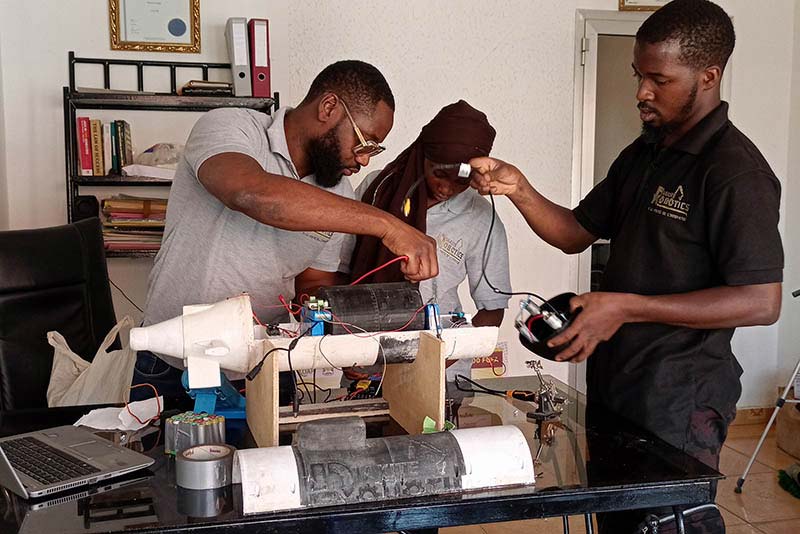 Abdoulaye Diakité, founder of Diakité Robotics, a mechatronics engineering company in Mali, works with his employees in his workshop in Bamako on cutting-edge engineering projects.

* This article was first published by the IFC. See the original.

By Olivier Monnier and Abdoul Maïga

Tired of seeing plastic waste littering the streets of Ouagadougou, the capital of Burkina Faso, engineer Calvin Tiam took matters into his own hands.

With the help of Burkinabe and French research institutes, Tiam has developed a technique for manufacturing furniture, roofs and beacons from recycled polyethylene plastic packaging.

“It’s both an ecological and economical solution,” said Tiam, who founded Toiture Ecologique et Economique (TECO²) in 2018. “Recycled plastic is a better insulating material than corrugated iron, which is widely used in the region but is unsuited to our Sahelian climate. 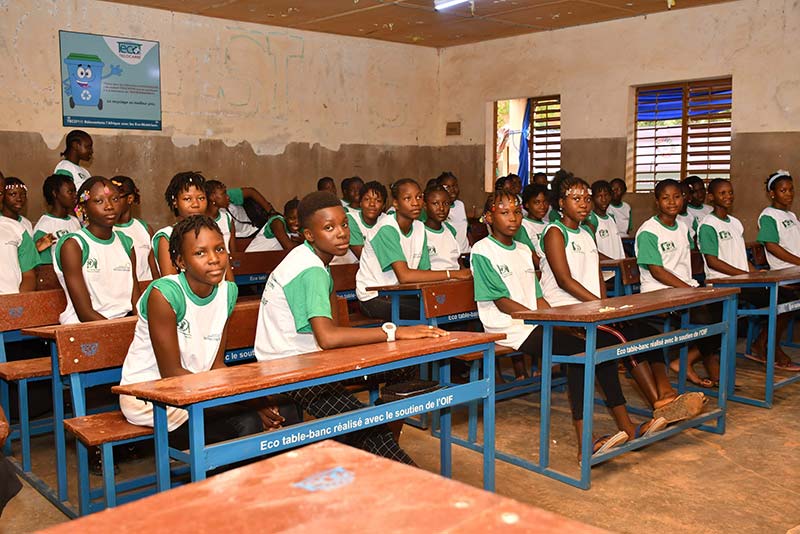 School furniture made from plastic waste by TECO² in a school north of Ouagadougou, the capital of Burkina Faso. Photo by TECO².

I&P is part of a growing group of investors and incubators who recognize the need and demand to support start-ups in the five countries that make up the G5 Sahel – Burkina Faso, Chad, Mali, Mauritania and Niger – to helping entrepreneurs create and grow their businesses.

Despite a difficult business environment in the Sahel, the region is a breeding ground for innovative start-ups. From Mauritania to Chad, a new generation of entrepreneurs is emerging with new solutions to the challenges affecting their countries and communities.

Support structures for start-ups are multiplying, such as the La Fabrique incubators in Ouagadougou, Impact Hub in Bamako, and CIPMEN in Niamey. Each supports local start-ups through training and business coaching. 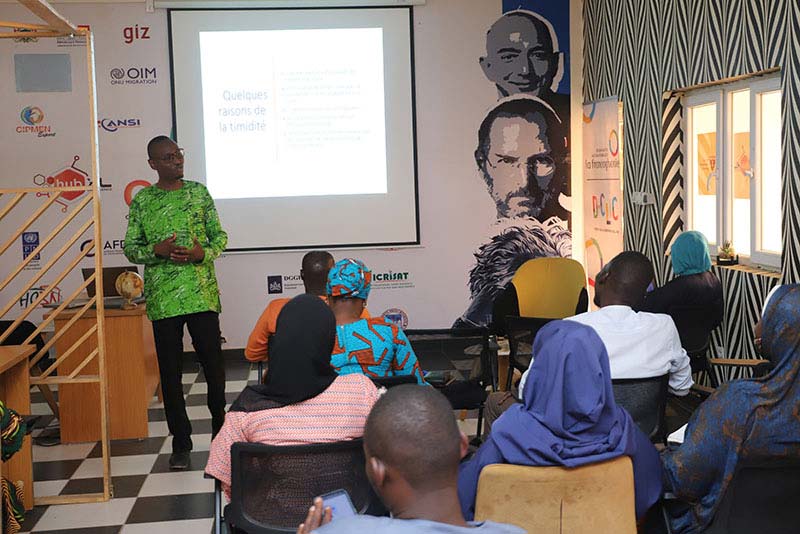 Entrepreneurs in training at the Incubator Center for Small and Medium Enterprises in Niger (CIPMEN). Photo by CIPMEN

In Mali, the number of entities supporting entrepreneurship increased from four in 2015 to 24 in 2019. The country’s first angel business network – “Mali Angels” – was established in 2019 and provided seed funding to two start-ups to date.

And then there is I&P. Two years ago, I&P launched I&P Acceleration in Sahel, a 10 billion CFA francs ($16.5 million) seed funding program backed by the European Union. It aims to finance 300 start-ups like TECO² in the Sahel region and neighboring countries by 2023.

The growing interest in the Sahel start-up scene comes as governments in the region also recognize the importance of empowering entrepreneurship as a strategic pathway to economic and social development.

This includes Mali, whose former government drafted a start-up law with measures and tax incentives to boost innovation and seed funding. Mauritania and Niger are also considering introducing similar legislation.

All hope to replicate the success story of neighboring Senegal, which in 2019 was the first country in sub-Saharan Africa to adopt a law aimed at facilitating the emergence of start-ups. With $353 million raised in 2021, Senegal has become a top destination for tech venture capital on the African continent, according to Partech, an investment platform for tech and digital companies.

“Even though it is still nascent, the start-up ecosystem in the Sahel is developing quite rapidly,” said Raphaël Dumont, investment director specializing in seed financing at I&P. “More and more people have a strong entrepreneurial spirit and interesting business ideas, but find it difficult to launch their start-up and grow.”

This is where start-up incubators and start-up investors can play a role.

Despite their passion and creativity, entrepreneurs in the Sahel face myriad challenges, including a lack of technical support, skills and access to finance. They also struggle with a lack of adequate digital infrastructure and poor digital connectivity, especially in rural areas.

For Tiam in Ouagadougou, funding was not his most immediate problem. He said the lack of training and technical support were his main challenges when starting TECO².

“Finding the right coaches and the right organizations to guide me and help me refine my project was a real struggle,” he said.

Structures such as start-up incubators aim to overcome some of these obstacles by offering non-financial assistance to entrepreneurs to help them refine their business models, develop their networks and seek funding.

The incubator, which organizes start-up pitch competitions such as the MauriApp Challenge and the Marathon de l’Entrepreneur, has since supported more than 100 projects in the fields of digital, livestock feed production, natural compost and solar energy equipment.

“When we started our activities, the start-up ecosystem in Mauritania was practically non-existent. Since then, a real dynamic has been put in place, even if there is still a lot to do”, declared Abdeljelil, president of Hadina RIM TIC.

“It is necessary to strengthen the capacities of entrepreneurs in Mauritania, whether in the ideation of their projects, in the financial and daily management of their start-ups, or in strengthening their resilience to shocks”, he said. she declared. mentioned.

In Niger, the Incubator Center for Small and Medium Enterprises (CIPMEN) was created in 2013, thanks to a collaboration between public and private actors. 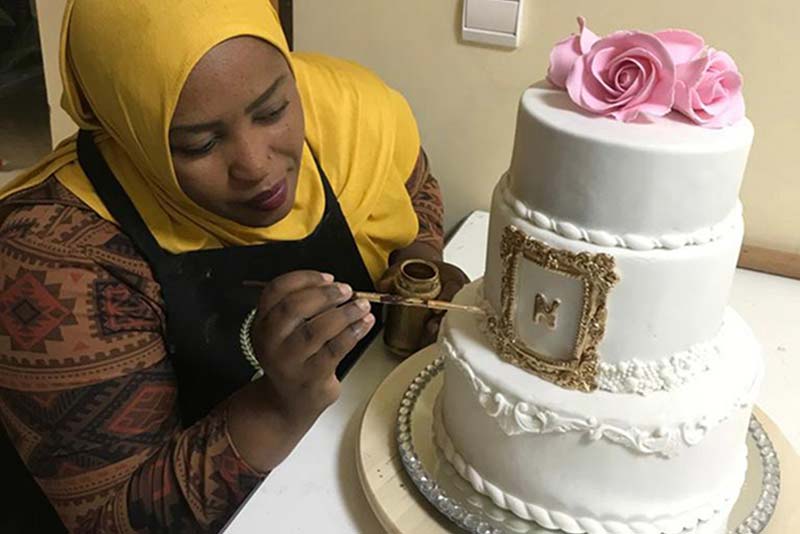 Nafissatou Noura, founder of Umm Manal, a catering service in Niamey, received technical support and seed funding from CIPMEN, a start-up incubator in Niger, to grow her business. Photo by Umm Manal

With seven branches across the country, the incubator now has more than 150 start-ups in its portfolio, and the companies it supports have created more than 1,000 jobs in 2021, according to Rouffahi Koabo, its CEO.

“We don’t have unicorns like in Kenyan or South African ecosystems yet, but we have some great success stories that we are proud of because they are generating jobs,” Koabo said, citing start-ups operating in the economy. food, e-commerce, manufacturing and media sectors.

To enable the emergence of start-ups with a regional dimension, in 2017 CIPMEN initiated the creation of Sahel Innov, a network of incubators operating in eight West African countries and Djibouti.

Many start-ups in the Sahel face the classic “valley of death” period, the gap between when the entrepreneur’s own resources from family and friends – known as love money” – run out and when the business is viable enough to attract investment, said Alexandre Laure, senior private sector specialist at the World Bank and regional expert.

“Because of the fragility of the Sahel, the argument of inadequacy still persists,” Laure said. “As a result, innovative start-ups and SMEs operating in the region face very fundamental issues, including a significant funding gap.”

It is a problem that Abdoulaye Diakité in Bamako knows well.

In 2014, fresh out of Kingston University in London, the engineer founded Diakité Robotics, a pioneering mechatronics engineering company in Mali. To start his business, he used his savings and borrowed 5 million CFA francs ($8,300) from his father.

“Access to finance is really a barrier for entrepreneurs,” Diakité said. “Banks only lend to the rich and ask for guarantees that are impossible to obtain.”

By winning hard-fought contracts to design traffic light controllers and secure the Radisson Blu hotel in Bamako after the 2015 jihadist attack, Diakité was able to meet this challenge, quickly generate money to reinvest in other projects. and hire five additional engineers.

Today, his company has annual sales of $130,000 and is developing ambitious projects, including a prototype submarine for use in the Niger River, an autonomous electric scooter, and bionic hand and shin prostheses. 3D printed.

To have an impact

But not all entrepreneurs in the Sahel can replicate Diakité’s experience. Most need external financial support to launch their start-up.

This is why funds that pave the way and support the start-ups of the Sahel with seed funding are essential to enable the emergence of more entrepreneurs.

I&P-EU’s Acceleration in Sahel fund, for example, provides interest-free loans ranging from $3,000 to $65,000 to help meet the financing needs of businesses during their incubation and acceleration phases.

Spread over a period of 6 months to 2 years, the financing – coupled with technical support adapted to the needs of each start-up – is used to support working capital needs, prototyping or market tests, purchases equipment, or to prepare the company for future financing.

To financially support the start-ups it incubates, CIPMEN in Niger has developed, with partners such as the French Embassy in Niger and the International Organization for Migration (IOM), pre-seed funds and initiation of a total amount of 250 million CFA francs (400,000 dollars).

“These funds have really helped me grow my business,” said Nafissatou Noura, founder of Umm Manal, a catering service in Niamey, which secured loans of 2 to 5 million CFA francs (3,200 to 8 000 dollars). “I was able to buy equipment, fridges and freezers, and eventually rent my own space with a fully equipped kitchen.”

I&P also notes that its efforts are paying off. Less than two years after its launch, the Sahel initiative is showing encouraging results: 10 jobs per year have been created in each company financed and the program has a repayment rate of around 70%, a figure that exceeds expectations, according to Dumont.

And entrepreneurs are grateful.

“We’re inundated with demand,” Dumont said. “There is a huge market to address but only a few structures like us offer seed funding. We need more partners willing to take risks and work with us to fund these essential activities.