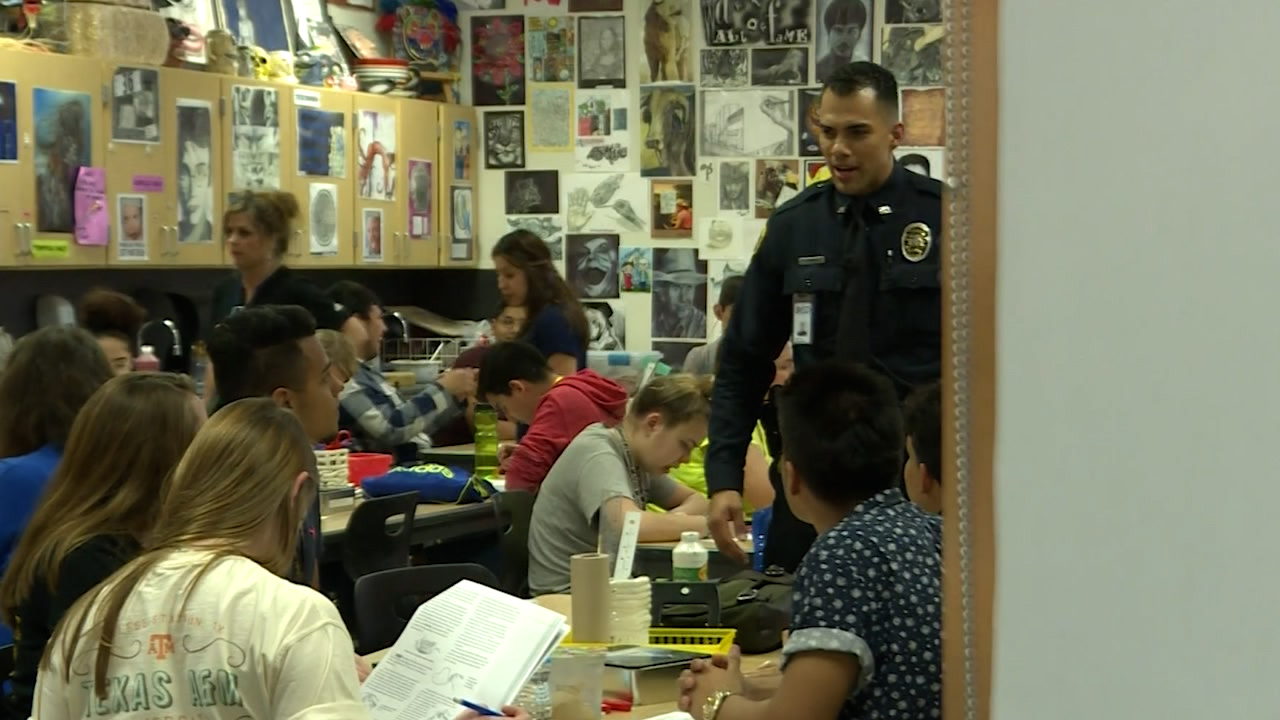 RICHMOND, Va. (WRIC) — Governor Glenn Youngkin wants a law enforcement officer in every school, but a bill requiring localities to take action could meet bipartisan opposition in the Senate.

Currently, 705 schools in Virginia, or 38 percent, do not have a school resource officer, according to delegate Karen Greenhalgh (R-Virginia Beach). She said that includes 596 elementary schools, 30 middle schools, 30 high schools and 49 others.

Legislation sponsored by Greenhalgh which passed a party vote in the House of Delegates this week would require each school board to enter into a collaborative agreement with a local law enforcement agency to employ at least one school resource officer (SRO) or unarmed school security (SSO) in each building. Two schools close to each other with combined facilities would be allowed to share, as is sometimes done with nurses.

“We’re trying to make it as flexible as possible so school boards and localities can do what’s best for their students and we’re just trying to make sure they’re all safe,” Greenhalgh said. .

Greenhalgh said schools that reach an agreement by August 2022 would meet the requirement, even if they initially struggled to recruit officers.

“The aim is of course to try to fill the positions as quickly as possible, but no school will be penalized for not being able to have enough officers in their schools. That was one of the concerns that came up because SROs are law enforcement and those positions are hard to fill,” Greenhalgh said.

Governor Youngkin celebrated the passing of the bill, which was on its legislative agendain one Facebook post earlier this week. He said: “Today, on #SRODay, I’m proud to announce that Delegate Karen Greenhalgh’s Bill HB873, a bill to put a School Resource Officer in every school, has passed. to the Chamber! We are so grateful for all the work that School Resource Officers do every day to keep our students safe.”

A companion bill in the Senate dead on a bipartisan vote of 11-4, with mostly Democrats and two Republicans voting against.

Sen. David Suetterlein (R-Roanoke) said the mandate would put a financial strain on localities, including the rural districts it serves.

“I look forward to working with the governor to find ways to provide the resources to do this, but I cannot vote for an unfunded term,” Suetterlein said.

Sen. Bill DeSteph (R-Virginia Beach), who introduced the defeated bill, said it included budget amendments directing the state to cover full costs on an ongoing basis. He said if the money hadn’t been approved, he would have taken a different approach.

“Anyone who says this is an unfunded warrant is inaccurate,” DeSteph said.

Governor Youngkin’s budget amendment would not cover the full cost of additional SROs or SSOs, according to Greenhalgh. If approved, it would provide $51.6 million over two years one-time funding for incentive grants, which require local matching adjusted for ability to pay.

Ministry of Criminal Justice Services estimates that the average annual cost to hire a new full-time SRO is $125,000, including salary, benefits, equipment, vehicle and training.

According to Internal Bill Impact Statement, “Actual costs can vary widely and depend on the locality in which the ORS is employed…Any actual tax impact on local school divisions is undetermined.”

Some argue the money would be better spent on support staff like school counselors and social workers. At least two Virginia school divisions have chosen to remove ORS from schools amid broader calls for police reform.

Ingris Moran, lead organizer of the youth group Tenants and Workers United, is among supporters backing the push.

“The school police presence also feeds into this school-to-jail pipeline where students of color are most likely to be criminalized within the school system,” Moran said. “The presence of the police will only cause intimidation and fear.”

Greenhalgh said there is no explicit penalty in the bill for localities that refuse to comply.

The bill’s impact statement elaborates“no school division that refuses or fails to comply with the requirements is eligible for a Commonwealth, Board of Education or Department of Education grant.”

Greenhalgh clarified that the intention is to prevent localities that do not enter into an agreement from getting grants specifically for ORS, rather than all state grants. She said she would be open to language that would make this clearer.